While Katherine and I were exploring Grazalema, we crossed paths with a man. The moment I saw him, I knew there was something.. not.. quite.. right. He had a kind of distant look in his eyes, and his mouth was hanging open slightly. But we were heading in opposite directions, so it wasn’t really a big deal. Katherine and I had plans to climb up the mountain and enjoy our lunch while admiring the breath-taking view of Grazalema and the Sierra de Grazalema behind it, but we never made it that far.

Because he came back. The man we passed had doubled back and was standing there in the middle of the road, staring up at us for the entire time we were frolicking on the mountain. We knew he was there, but we were waiting for him to get bored and leave so we could enjoy our lunch in peace.

But he didn’t. He just…. stood there. Staring. At us. It wasn’t even subtle. He was facing us and holding his hand above his eyes to block the sun so he could see us better. It was CREEPY. If we moved farther to the left along the mountain, he would follow to the left. If we moved to the right, so did he.

Katherine and I were spooked, but then I shared my suspicion with her that he might have some sort of mental problem, and we figured if it came down to a battle of wits we’d be able to outmaneuver him.  Plus, there were two of us, so if it came down to something physical (God forbid), we would have probably been able to overpower him long enough to run away. It seemed like he only moved at a very slow pace, so we could outrun him. My suspicion was further reinforced by his actions. Whenever a car would come down the road they would honk at him for standing in the middle of it, and he’d let out a “RAAHHH!!” while shaking his hands at the car.

After waiting for a while longer, we eventually reached the conclusion that he wouldn’t be leaving any time soon, so we decided to ignore him and were about to sit down to eat, but then….

He started to climb up the side of the mountain towards us. And we bolted down to the road like we were mountain goats (we saw the carcass of one while we were exploring up there, if that was some sort of omen of what was to come). We figured we’d be safe once we reached the road, and we couldn’t see him anymore. So we started laughing and walking along the road.

Until I turned around and saw him walking behind us.

We started sprinting again, this time down into the town. We started weaving in and out of the narrow streets, trying to lose him.  We figured we’d be safe surrounded by houses, but it was eerily deserted. That’s when I remembered that everyone was in the town square enjoying a leisurely Sunday afternoon. We ran down an interesting flight of stairs, and I paused to take a picture of it. As I lowered my camera, Katherine let out an exclamation and pointed to the top of the staircase.

AND THERE HE WAS.

Katherine and I just screamed and ran for our lives down into the center of town where we were surrounded by Grazalemans. Safety in numbers, right? We ate lunch (I kept glancing over my shoulder but never saw him again), and afterwards I went to the police station. I figured if he was a local, they’d know about him and be able to tell me something about him. I approached a police officer and asked him if there was a man in Grazalema who had… problems (I then pointed at my head, making it obvious I was talking about mental problems). He hesitated, then said, “Yes. Was he skinny?” “YES!” “Riding a bicycle?” “No, but he moved very slowly.” “Ah, yes, that’s him.” I then told him that he had been following us. He asked if he was still following us, and I told him no, we ran away. He said if I saw him again to alert to police on duty, but not to worry because he was harmless.

I felt so much better after my chat with the police officer. Katherine and I enjoyed the rest of our time in Grazalema, and made jokes about our strange encounter. We looked through our pictures and realized he was in a few of them. We even gave him a name, Rabo.

Here he is, standing on the road where the cars would honk at him, watching us.

^^^ Dark spot at the top of the staircase. Click to enlarge the image.

At 4 PM we got on the bus that would take us back to Ronda, away from Grazalema and Rabo. But after our trip, Katherine told me that she had decided not to tell me as it happened because she hadn’t wanted to freak me out, but that when our bus was pulling out of Grazalema, the bus driver had honked at someone in his way.

The man was skinny, wore a dark shirt and moved slowly.

And when the bus driver honked at him, he let out a “RAAHHH!!” 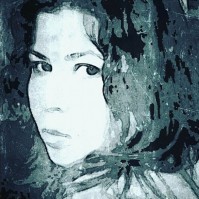